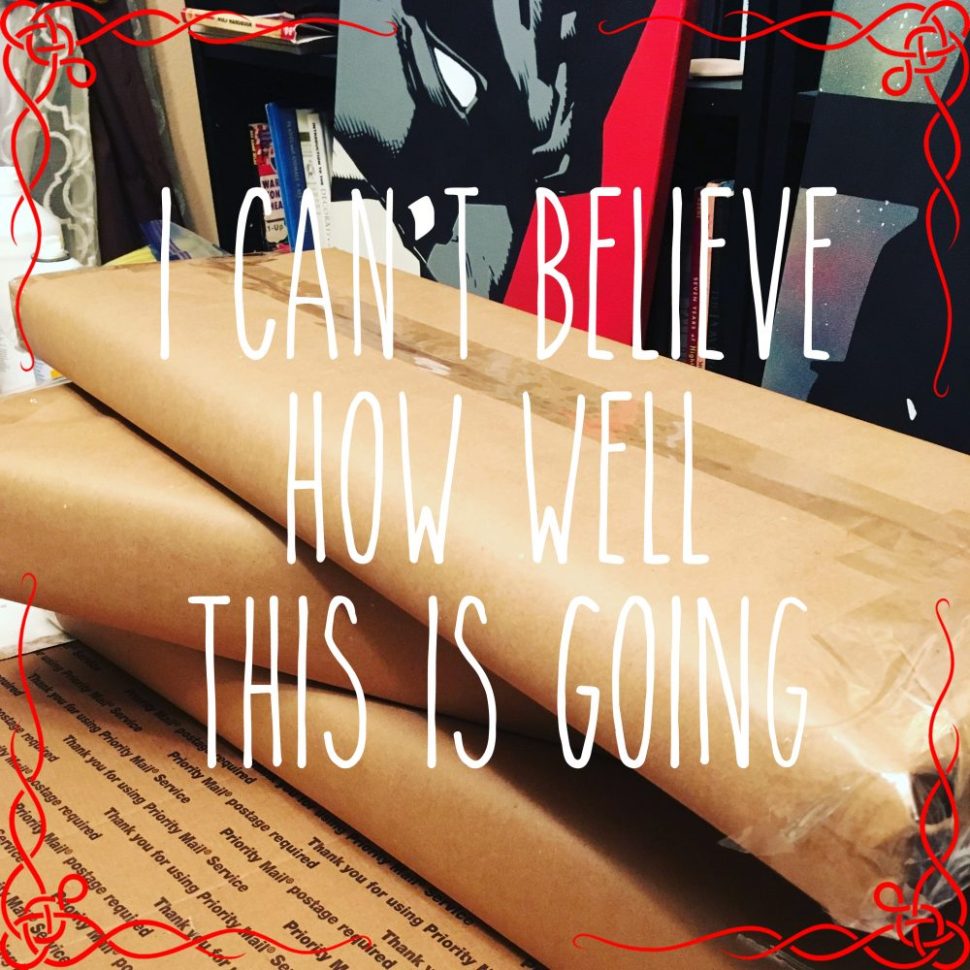 I don’t know why I decided to start a blog two months before the Christmas holiday. Even if you are an artist who doesn’t often work, odds are you are busy this time of year. If not with commission work, then at least with making gifts for loved ones.

When I decided to get out of the studio for a while and focus on promotion, I expected a slow buildup, something like when I first started painting. I grew as an artist over many years, and it took a long time before people thought of me as ‘that artist guy I know’. I thought building up knowledge of myself to the world would be a slow burn, but it is a bright fire.

Where to even start..

I picked up two older model Go-pros on Ebay for about $50 each, a couple cheap tripods from Amazon, and went to work making instructional videos.

I’ve never done any filming or editing, but I know I’ll spend hours watching people create on YouTube and dream of doing it myself. When I watch the actual work that goes into something I have a much deeper appreciation for it. I see the story of it, and getting people to see that should be one of your main goals if you want to sell your artwork. Using Youtube to as a medium to tell that story seems obvious. It’s yet another window in my storefront.

I took video of my next project, and quickly found that filming everything I do as I am painting is really hard! It was hard to know where to start. I set one camera up stationary at my painting table and had the other move around with me. It takes a lot of steps to paint with stencils, the preparation takes almost all of the work so there is a ton to show. The actual painting part is over pretty quickly so I needed to think about how I could make my videos interesting but also informative. My main goals in this are to entertain, inform, and to show the immense amount of work that goes into a piece so I don’t feel so bad about my prices.

I would say it took twice as long to paint that piece as it would have normally, but at the end I had hours of footage. I spent the next day learning about video editing, eventually settling on Lightworks. The free version only requires you register and is a very powerful editor. There are a lot of good videos to learn the basics and it only took a day before I edited my first video! I was super proud of it at the time, but in retrospect it wasn’t very good. A lot like my first painting. With a lot of good feedback and watching others make similar videos, every subsequent one has improved and I now have a format I am happy with. I have been able to upload a video with every painting I think will be of interest to people and like my paintings, I see how they get better the more I practice.

I sold 3 copies of my last painting and another that was similar by releasing the painting on the appropriate Reddit along with the video in the comments. I had one customer say to me that he would have never bought the piece if it hadn’t been for the video, which was quite a validation. The video drove people to my website where they actually bought paintings! They were also finding my social media from there. I was overcome with work from just one post. None of that has ever been the case for me.

That’s really only the beginning of the story. The other points in my plan are working out just as well. I’m gaining 5-6 followers a day on Instagram and interacting with a lot of other artists there. I’ve made a plans for some art shows that I am really excited about, 3 months in my local library for one! I have a new logo and new business cards. And most importantly, I have work!

My wife worries over me that I am working too hard, but I try and convince her that I’m seriously loving every second of it. I wish I could work more and sleep even less. Keep an eye out for more once Christmas calms down. I have so much more to share!

3 thoughts on “I can’t believe how well this is going..”